Baby Z is one month old and was on the operating table for routine
hernia repair. Just prior to incision I heard the nurse anesthesist,
we have no MD anesthesist, rustling about. I asked if everything was
ok and he said no doctor. I immediately tore down the sterile drapes
to find the infant without an endotracheal tube blue and pulseless.

I began chest compressions immediately, the child could not be bagged
masked so I reintubated him and continued with advanced cardiac life
support as in the USA, giving epinephrine, atropine etc...

The child's pulse came back and he took some breaths on his own but
not enough steady respirations to sustain his life. He was also
hypoxic for some time so I had no idea what to make of his neurological
status.

We have no ventilators here so I moved him to the ward with his
endotracheal tube in place, connected him to a saturation monitor, an
oxygen concentrator, taped my stethoscope to his chest and my ears and
kept bagging everytime his stauration fell below 90 percent. My back
up was to have another concentrator should this one quit, which it did
needing to be restarted every 3 minutes! I also had people set up as
"runners" should the power go out, which it did, to run immediately to
the generators to make sure they would be turned on.

I was very suspicious that he had flash pulmonary edema, I've
experienced this a few time post-op back home. So, I started lasix and
kept bagging, oh how nice it would be to have a portable Chest Xray if
only to make a diagnosis. As a new attending surgeon, no one can
understand the relief that comes with a correct diagnosis.

This went on for nearly ten hours. After ten hours little Z was
maintaining his own respirations and saturations. At this time I
decided to pull out the endotracheal tube put him on face mask oxygen
and pray. God willing the child struggled a few hours and by evening
was suckling looking about and neurologically intact. He has had an
episode of seizure but seems to be doing well. He will now have to
battle the anticipated pneumonia from the intubation and probable
aspiration when he seized.

Oh and the mother asked today if I will take him back to fix the
hernia...uhm...not today!
Posted by Crystal Cunningham at 6:38 PM No comments:

The Textbook Says It Should Work

This week held an interesting patient, Brunhilda. Brunhilda presented in clinical stage four HIV, or AIDS. In addition to her admitting diagnosis and being treated for thrush, HIV gastroenteritis, cachexia and having a hemoglobin of 3 (normal is above 12) and platelets of 40  (normal is above 120) she decided to have a sigmoid volvulus. Now the initial treatment, assuming there is no dead bowel is to try to reduce this with a colonoscope.  After explaining what I needed to a nurse it was decided there was one of these "strange instruments" in a closet but unfortunately no one had a key! Seriously! They wouldn't let me practice my Tai-Kwon-Do skills and break the door so patiently, three hours later, the key was found.

Now, I have done many colonoscopes but I have never had to attempt to pass a scope through a volvulus without isuflation, a monitor, or electricity. It was the only hope that could be done as there was no way this woman could go "under the knife". So the textbook says it should work...  and let me tell you the relief I got when after passing the scope I got the biggest shot of stool in the face! Thank you God and Thank you to the gastroenterologist who left a closet of dysfunctional yet life-saving scopes!!

Brunhilda  started tolerating clear liquids today and maybe just maybe if her HIV gets in check she can have definitive surgery for her sigmoid volvulus  before I depart.
Posted by Crystal Cunningham at 9:54 AM No comments:

Francois came to me following a traffic accident. His leg was gangrenous and I took him to the theatre to debride it. He was under spinal anaesthesia so could communicate with me. I told him "Je doix coupe isi" and he understood my French telling him I must cut his leg off. He refused even with me telling him he will die. The next morning I saw him and now not only had the gangrene moved several centimeters up his leg but he also had a surgical abdomen. I was able to convince him to allow me to explore his abdomen and amputate his leg.

He is now ten days out of surgery for the amputation and he had blown open completely the second portion of his duodenum, which I was able to repair. He is eating a full meal and the education I have done with the creation of the wound care team has him recovering well at his  amputation site and nutrition wise. He will return to complete the reconstruction on his leg next week after some good nutrition and then hopefully off to Bafut for physical rehabilitation.

I wrote this poem after a late night discussion with his wife and son (sorry no pics internet isn't so hot right now):Your blackness reflects in my eyes of china blueLines of pain zig-zag around your faceIn a maze  that I can not understand and is so exhaustingThat it would put angels to restI am not sure what you are trying to say to meYou are not nameless yet I do not know your nameI am not sure how to love youbut as long as there is no price to it I?ll stayIn this hour it is too easy to construct an artificial distanceIn this dark place with death waiting when weAre unsure if in the morn we will be met withThe preserved honey of life or the mortuary concrete
Posted by Crystal Cunningham at 11:01 AM No comments:

Je suis presse, that is French for I am rushed. It may be spelled incorrectly but as it says I am rushed!
My french has been coming along as I bartered "like an African woman" I was told, for a French textbook. In addition the operating theatre has been moving along with perforations and c-sections and so many wounds. Aside from the business of clinical work I have introduced wound care teaching and something akin to a "wound care team" as it would be called in the states and it looks like improvements are slowly happening we will see how it goes.
Lastly, I have begun some work to improve upon the library and will be reaching out for help as far as that goes.

God Bless!
Posted by Crystal Cunningham at 11:53 AM No comments:

When it Rains it Pours 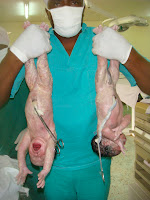 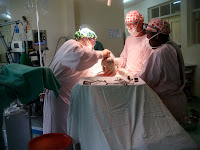 Well when it rains it pours here and I don't mean only the monsoon rains that come and keep my clothes from drying for over three days!

Today was slow which was okay considering yesterday was three emergency c-sections with one woman who did not know she was pregnant with twins. Surprise for everyone and all mamas and babies doing well today.
I am preparing a lecture for Saturday on wound care for the hospital staff and have also noticed there is no medical library...hmmmm?
Posted by Crystal Cunningham at 2:23 PM 3 comments:

A Box of Chocolates 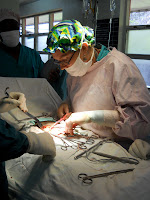 So far I have done two laparotomies and was told that opening an  abdomen in Cameroon is like a box of chocolates....you don't know what you will get.  So true! 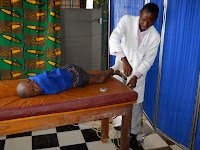 My days are filled with many patients and I  think over half the ward is filled with wounds and fractures from motor vehicle accidents. My attempt at a shoulder reduction today was something else...patients present in their condition very late and  this 81 year old woman presented with two weeks of dislocation.In the picture is little Yvette, an orphan. She is receiving physical therapy. She had an injured leg from a fall and then attempt was made by a traditional healer to fix it which caused severe compression sores. We have the wounds closed now and she is improving and hopefully will be well enough to start school.
Posted by Crystal Cunningham at 8:45 AM 5 comments:

We've sorted through a garage full of supplies in hopes of finding what was specifically requested, or else making something similar.  We've ended up with two suitcases, total of 100lbs, for checked baggage and hope it gets put to good use.Cherrish, my daughter (in the picture), and other friends were instrumental in getting the job done and Randy asked me last year  "Crystal when are you gonna move these supplies so I can get the car in the garage?" I said "When God tells me too", his reply "I sure hope he tells you by winter!"
Posted by Crystal Cunningham at 9:33 AM 2 comments: 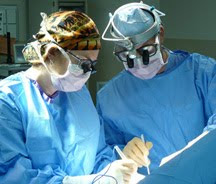 I am trained in general surgery with an emphasis in global surgery. When not with my beautiful family of six (Randy, Cherrish, two puppies, one cat, and nameless other outdoor friends) in the Pocono Mountains of Pennsylvania, I am committed to practicing in areas that are MOST in need. I plan on working in rural America with Indian health, various developing countries, and areas of environmental and political disaster.

I look forward to returning to Cameroon to hug the beautiful children and continue my practice while achieving a degree in Global Health Policy. I may be a little out of tune without my violin but hope that the harmonica will be a good substitute!

Donate to my Mission

Send me a Prayer